Although new cases of the virus are still high, the seven-day daily average was down for two days in the past week. As such, we may be close to a peak. This conclusion seems reasonable as much of the Thanksgiving travel surge should be starting to play out, and control measures are becoming more widespread.

While the top-line numbers look less bad, that is not the case in many states, with the virus resurging in areas that thought they had it under control. California, New York, and Massachusetts have all imposed new restrictions, as case counts rose sharply after the holiday. Further, health care systems remain under severe strain in many states. We may be getting close to a peak nationally, but in multiple states the risks remain high.

The good news on the medical front continues to come from vaccines. The Pfizer vaccine was approved last week and is now being deployed. The Moderna vaccine is likely to be approved tomorrow with shots starting next week. Recent projections of vaccine availability are improving and suggest we could approach herd immunity in the U.S. as soon as June. While the risks remain significant in the short term, the vaccine deployment means medium- and longer-term risks now look much better.

The economic news also deteriorated as pandemic effects continue to show in the economic news. Job growth dropped significantly in November, and layoffs were up sharply for the third week in a row, due to widening shutdowns in multiple states. Despite the jobs slowdown, growth continues, and high-frequency retail sales data actually bounced on holiday demand. The combination of slowly decreasing medical risks and economic resiliency kept markets close to all-time highs in the past week. Let’s take a look at the details.

The Virus: Thanksgiving Travel Cases May Be Subsiding

New cases per day. The most obvious metric for tracking the virus is daily new cases. After a data distortion lull in the immediate aftermath of the holiday, case growth continued to rise as the holiday travel generated a new surge. While that surge may be fading, case growth remains at very high levels.

New daily infection rates were 248,686 on December 16, up from almost 227,387 a week earlier. The seven-day average number of new cases per day rose to 220,017 per day, up from 213,767 a week ago. While case growth has clearly continued to rise, the good news is that the rate of increase has slowed sharply. If this trend continues, we should see the third wave peak in the next couple of weeks. 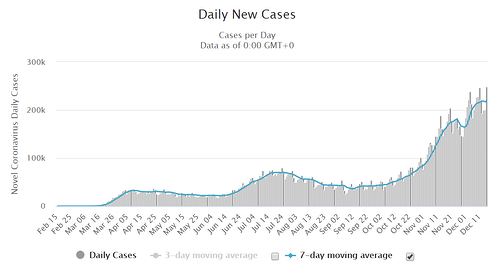 Death rate. The death rate reporting has also moderated after a sharp bounce. This is a lagging indicator and runs 6–8 weeks behind case growth. As such, recent increases in the death rate reflect infection growth in early November. On a seven-day moving average basis, daily deaths were at 2,570 as of December 16, up from 2,401 in the prior week. As the number of new cases has spiked since Thanksgiving, we can reasonably expect death rates to increase substantially over the coming weeks. 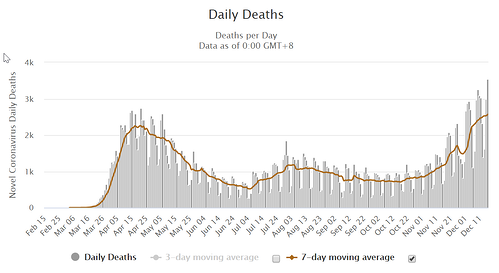 Testing. Finally, we see some tentative signs of improvement in the testing news, as positive rates may have peaked even as the number of tests remains high. This is consistent with the slower case growth and could be a leading indicator of improvements. In any case, it suggests future case growth may moderate. 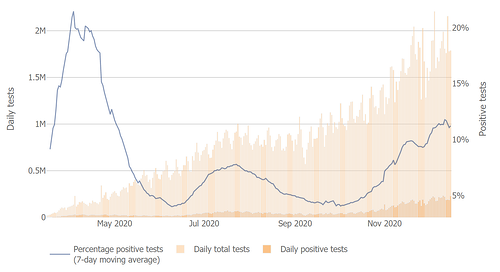 The bottom line is that the pandemic has resurged and continues to get worse, despite recent signs of moderation in the growth rate. The effects of Thanksgiving travel appear to have restarted case growth in states where it had been under control. As such, the risks are still substantial. That said, the most recent data is showing that the wider imposition of shutdowns and restrictive policy action may be working and should result in further improvement in coming weeks. We are also starting to deploy vaccines, which will have a growing positive effect. While risks are still substantial in the short term, the medium- and longer-term pictures look brighter.

The Economy: Pandemic Damage Gets Worse

Jobs and consumers. Government-mandated shutdowns in response to the deterioration of the medical situation, along with changes in consumer behavior, have hit the economy hard in recent weeks. Job growth dropped from 638,000 in October to 245,000 in November, and layoffs have risen sharply for the past three weeks. Most affected are the low-wage workers (see chart below). With the employment market down, consumer confidence has softened further, leading to a sharp drop in retail spending as reported for last month. Overall, the data suggests that the third wave has now hit a point where it will act as a significant drag on the economy until it reverses. 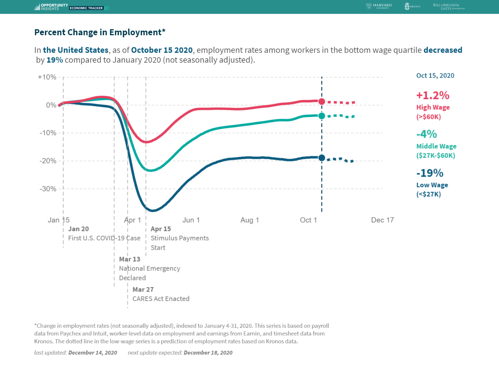 The real question, going forward, is how durable this recovery is. Much of the data has remained solid despite the ongoing third wave, suggesting substantial resilience. The question is whether the accelerating damage will reverse the economic recovery before the vaccines can be widely deployed. So far, given the resilience of the economy and the fact that it is still growing, it is still likely the recovery will stay alive until the cavalry arrives, in the form of either the third wave moderating or vaccines becoming widely available. At that point, we should start to see consumer confidence and spending bounce back, as we saw after previous waves. Another potential savior is another federal income support program, which is looking very likely and would substantially reduce the short-term economic risks.

Markets continued to rally and hit all-time highs again. Reasons this week are again the good news on the vaccine front. With vaccines now available and ramping up, we are at the end of the beginning of the pandemic, and markets recognize that. The other significant positive this week is a new urgency for Congress to pass additional federal stimulus, which would be a significant and needed help to the economy. Between that short-term cushion and the ongoing improvement in the longer-term picture, markets are clearly expecting normalization in 2021—and prices are responding.

The bad news this week is that the third wave continues to get worse, and the economic damage from the pandemic continues to mount. The good news is that policy is starting to succeed in containing the virus, and the federal government will likely pass a stimulus bill, mitigating both major risk factors. The most likely case for the next couple of weeks appears to be slow improvement of the medical news, as case growth starts to slow again, and slowing but continued deterioration on the economic front absent a stimulus package. Markets will likely keep bouncing around on new developments, so expect more volatility in the short term.

In the longer term, the good news is that vaccines are now rolling out increasingly quickly. In a couple of months, we should be approaching the end of the pandemic when the economy can normalize and start to really grow again. Despite the headlines we are seeing today and the real risks, we are making progress. We will get there—but it will just take a bit longer.