This week, the biggest news has been the election. Of course, the outcome remains uncertain. But the election itself went without a hitch, substantially reducing the perceived political risks. Although we may have weeks or possibly months of litigation ahead, the worst risks are now off the table—giving the markets something to cheer about over the past two days.

At the same time, the medical news has gotten worse. The third wave of infections has accelerated, case growth has moved to new highs, and the geographic spread of this wave continues to widen. Case growth in many states remains at levels that threaten the health care systems there.

While the medical risks increase, the economic recovery is still moving forward. Consumer confidence and spending, an area of concern, have shown better data, which is encouraging. Plus, the recovery has been more resilient than expected. With the continued economic progress, on top of the reduction in political and policy risks, financial markets have rallied. Let’s take a look at the details.

New cases per day. The most obvious metric for tracking the virus is daily new cases. Here, we see that widening state-level outbreaks have continued to increase viral spread, to the point we again see new highs, at over 100,000 cases per day for the first time. The seven-day average number of new cases per day is now up to almost 93,000 per day, up from 78,000 a week ago, again a faster increase than the previous week. This is the seventh week in a row we have seen an increase, and the rate of increase has grown every week. This increase, combined with the wider geographic spread, means case counts are likely to keep rising over the next several weeks. The third wave is now significantly more severe and looks likely to be much longer lasting than prior waves. 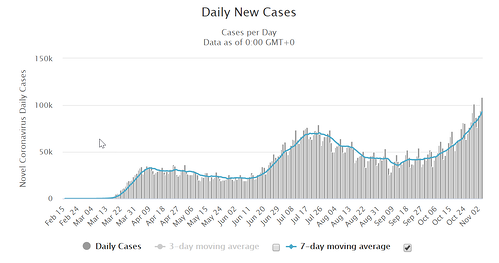 Death rate. We are also starting to see the death rate rise. This is a lagging indicator and runs 6–8 weeks behind case growth. As such, recent increases in the death rate reflect faster infection growth in September—right when the third wave got going. On a seven-day moving average basis, daily deaths were at 894 as of November 4, up from 818 in the prior week. As the number of new cases has spiked since September, we can reasonably expect death rates to increase substantially as well over the coming weeks. 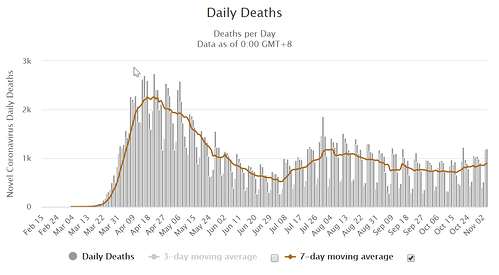 Testing data. The testing news also got worse. The number of tests has peaked for the moment, although it remains quite variable. The positive testing rate also continues to rise further above the recommended maximum of 5 percent, showing that the pace of increasing infections is once again outrunning testing capacity. While some of the increase in cases may come from better visibility from increased testing, the rising positive rate suggests the growth in cases is more likely due to a widening range of infection growth. This idea is supported by the fact that, in several states, the positive rate is now well over 20 percent. 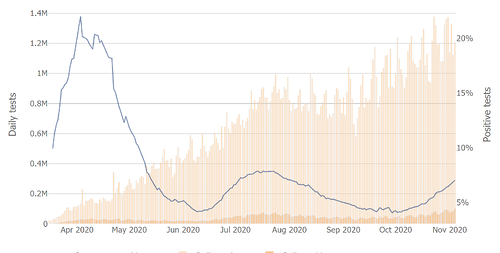 The bottom line is that, on the medical front, the trends are still moving in the wrong direction, and a third wave continues to spread. More than 20 states are now seeing the fastest spread of the pandemic thus far, a minimal improvement from last week. In several of those states, there are outbreak hotspots that are now becoming health emergencies. Even in states where the virus remains under control, spread rates are rising.

Looking forward, the question is whether the situation will continue to worsen. Given the ongoing accelerating infection rates and the fact that many outbreaks are in rural areas with limited local health care resources, that outcome looks likely. Further, with the rising positive test results around the country and the lags between infection and detection, we are likely to have weeks or more to go before the full effects will be seen. Overall, the medical risks are likely to keep rising over the coming weeks, as the third wave runs its course.

The Economy: Signs of Slowing, But Recovery Continues

Consumer economy. While the medical situation is deteriorating, the economic recovery continues, despite mixed data. The job market has been better in the past couple of weeks. For example, layoffs have declined, although they remain at high levels. Similarly, while recent consumer confidence has ticked down somewhat, consumer spending has been holding up. While this news is mixed, in the context of rising medical risks, overall it suggests that the consumer is more resilient to the rising risks than had been feared. 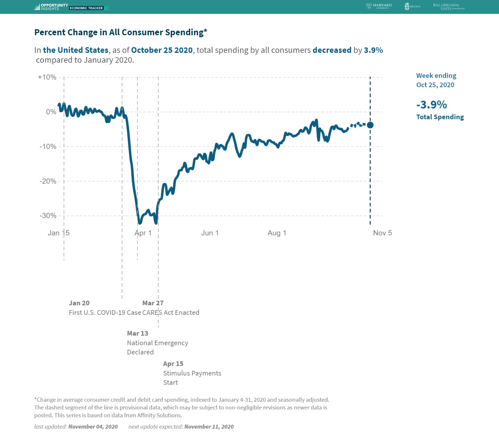 Business sector. On top of the signs of continued growth in the consumer economy, the business sector continues to do well. Business confidence and investment remain at pre-pandemic levels, and specific higher-frequency indicators are showing improvement in many cases.

The real question, going forward, is how durable this recovery is. Much of the recovery so far has been based on the spending power generated by the federal supplemental income support. But recent data shows that the recovery is continuing even after that support has stopped. Given the resilience of the recovery in the face of the medical and stimulus headwinds, it is likely the recovery will be durable.

With that durability in the face of risk, we should remember there are also opportunities. There is a real possibility the economic recovery could accelerate again, for example, once the medical risks subside. Further, with the passing of the election, another federal income support program is likely, which would help a lot. While there are certainly headwinds, so far at least confidence and spending are still holding up, and the recovery is moving forward despite some slowing.

The Markets: Rally on Reduced Risks

Markets are reacting very positively to the fact that a great deal of the election uncertainty has passed. Not all of it, but at least the worst outcomes seem to have been avoided. Markets hate uncertainty, and this move is likely to be a tailwind for a while. Markets are also responding to reduced policy risk. The Senate will remain very closely divided, which will constrain the policy options of whoever wins the presidency. That probably rules out any substantial activity on taxes, as well as limiting any actions to control the major tech firms. On the positive side, once the election is resolved, the political order will be set, and items such as fiscal stimulus can be negotiated. The story here is both that uncertainty is down significantly (on the political side) and that risks are down (on the policy side).

Between the resilient economy and the reductions in political and policy concerns, markets are largely ignoring the rising medical risks. Given everything that is going on, that seems a reasonable reaction, but it is one that leaves open the possibility of more volatility ahead as medical risks move back to the headlines. We can reasonably expect the current positive trends to have some durability over the next couple of weeks, but the medical news could easily lead to more volatility during that time.

The news this week is that the election is now past, along with many of the risks, and markets are cheering that fact. At the same time, they seem to be ignoring the medical risks, which may be out of the headlines but are rising. The third wave continues, with medical risks rising, especially at the state levels. With the data so far showing no signs of peaking and with widening geographic spread in multiple states, the risks are now material at the national level. Note, however, that we have been through this before and that it is just a matter of time until we once more bring the pandemic under control.

The economic risks are also real. Despite recent positive news, we do see some slowing in the recovery. That said, growth has continued and has been much more resilient than expected. This is a positive signal for the future, and we have more upside risk here as well as more federal stimulus looks probable now the election is over. Finally, while markets are rallying on the reduced political and policy risks, and possible stimulus, more volatility is quite possible as the medical news moves back to the headlines.

Given all of this, over the next couple of weeks the most likely case appears to be further deterioration of the medical news as the third wave proceeds, as well as continued slow improvement on the economic front. Markets will likely keep bouncing around on new developments, so expect more volatility. This will be a difficult period until we get the pandemic under control again—but get it under control we will. It will just take some time.