As expected, the seasonal holidays have affected the pandemic indicators. The COVID-19 case rate appeared to pull back, but that is likely due to slower reporting than an actual decline in cases. Looking forward, travel and gatherings over the holidays may well result in another surge of cases. That said, however, the signs of improvement are real.

Even taking the holidays into account, the rate of case growth has slowed. Although, according to the headlines, the vaccination process has been slower than anticipated, its pace will improve over the next couple of weeks. The number of vaccinated individuals will grow, as will the number of people who have been exposed to the virus. Both factors should help reduce infection rates. We are getting close to the worst of the pandemic, and may be there already. After the peak has been reached, more improvement should come steadily.

Some recent economic news has been negative, due to widening lockdowns around the country. Still, we can point to positive economic signs. The federal government is in the final stages of passing a stimulus program that should support the economy over the next couple of months. Regarding the medical news, there are signs of improvement and reasons to believe we are close to the bottom of the pandemic. That seems to be what markets are thinking, as a combination of slowly decreasing medical risks and economic resiliency has kept them close to all-time highs in the past weeks. Let’s take a look at the details.

The Virus: Christmas Travel Cases May Be Showing Up in the Data

New cases per day. The most obvious metric for tracking the virus is daily new cases. We are now seeing a data distortion lull in the aftermath of the Christmas holiday, as we did with Thanksgiving, when a significant drop in new cases reversed. Now, as then, the drop is likely due to slower data reporting. As a consequence, case growth is very likely to bounce back as the holiday travel surge shows up over the next couple of weeks. While the lockdowns in many states are working, the third wave continues at a national level.

New daily infection rates were 234,775 on December 30, up slightly from 233,572 a week earlier. The seven-day average number of new cases per day was 185,704 per day, down from 216,683 a week ago, reflecting the drop in reported cases over Christmas. While case growth remains high, the good news is that the rate of increase may have slowed. If this trend continues, we could see the third wave peak in the next couple of weeks, once the post-holiday surge fades. 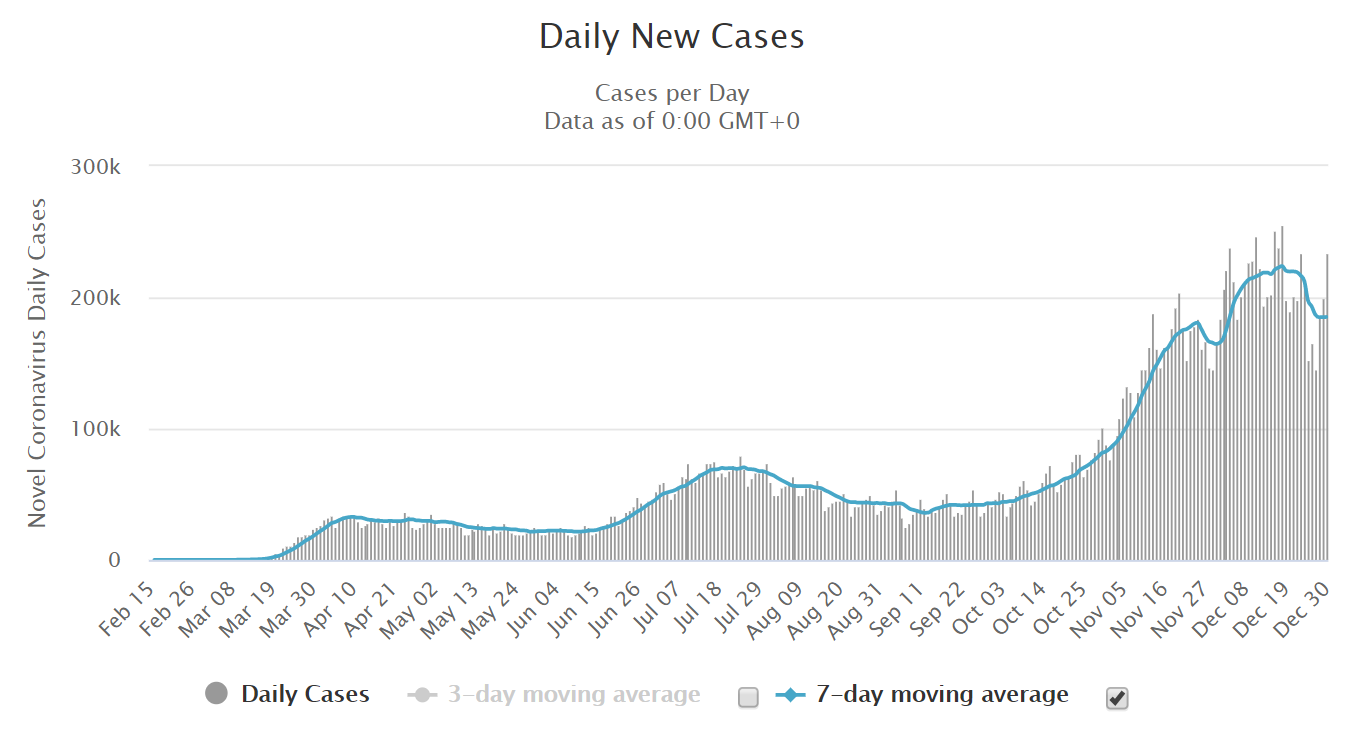 Death rate. The death rate reporting is also showing the same trends. This is a lagging indicator, and runs from 6–8 weeks behind the case growth. As such, recent increases in the death rate reflect infection growth in mid to late November. On a seven-day moving average basis, daily deaths were at 2,364 as of December 30, down from 2,752 in the prior week. As the number of new cases has spiked since Thanksgiving, we can reasonably expect death rates to increase substantially over the coming weeks. 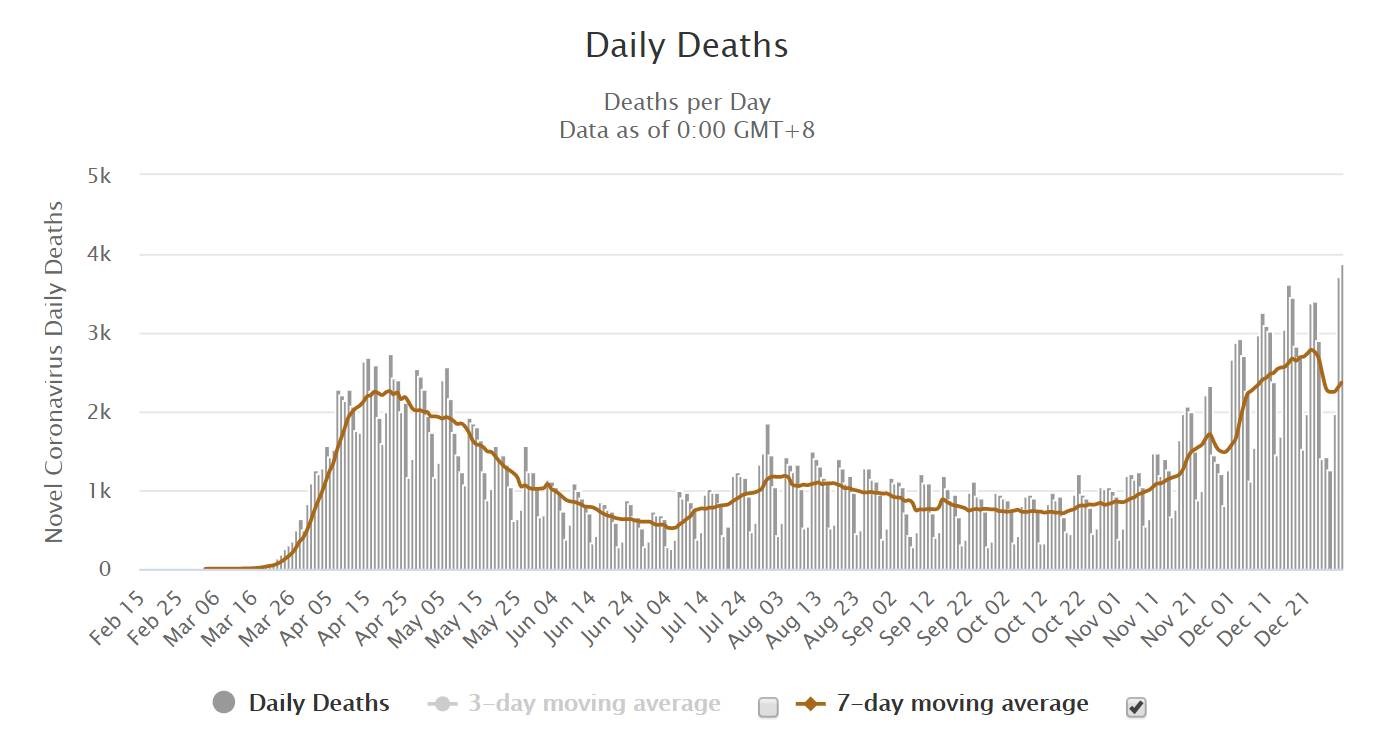 Testing. Finally, we see that the testing news is also indicating we are not through the worst of the pandemic yet. Testing was down over the holiday and positive rates were back up. The good news is that, even though tests are down, the positive rate remains below the highs we’ve seen. This data, which is consistent with the slowing rate of case growth, could be a leading indicator of improvements.

The bottom line is that while the data is better, it does not indicate real improvement. Instead, the data is based on post-holiday reporting delays. That said, there are signs of moderation in the growth rate for new cases. These signs suggest that, absent the effects of holiday travel, things would look better. Once the effects of holiday travel work their way through the data, we should see improvement in the next couple of weeks. Given the deployment of vaccines, we should be approaching the end of the beginning. While the pandemic may well look worse over the next couple of weeks, the medium and longer-term pictures look brighter. 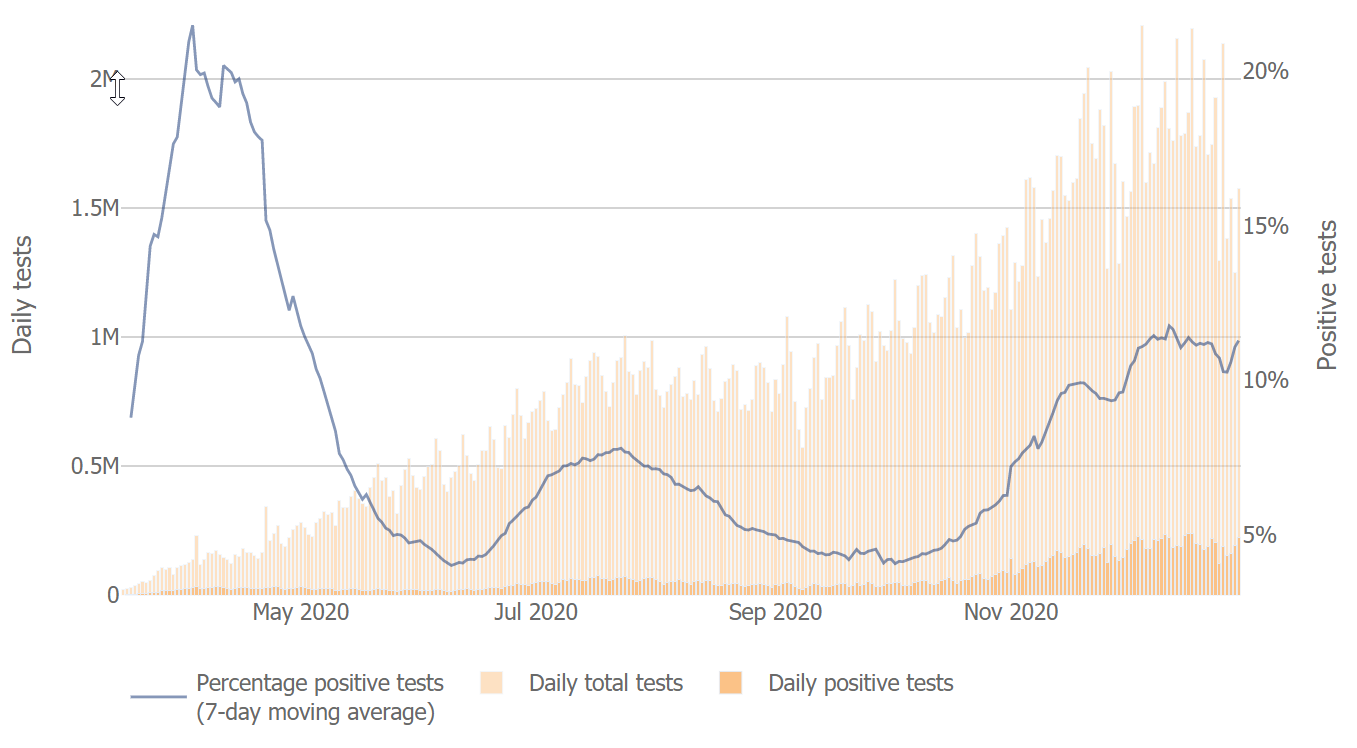 Jobs and consumers. Government-mandated shutdowns in response to the deterioration of the medical situation, along with changes in consumer behavior, have hit the economy hard in recent weeks. Job growth dropped from 638,000 in October to 245,000 in November. Layoffs have risen sharply for the past three weeks, although we did see a lower level of layoffs last week. Most affected are the low wage workers, as shown in the chart below. With the employment market down, consumer confidence has softened further, leading to a sharp drop in retail spending as reported for the last month. Overall, the data suggests that the third wave has now hit a point where it will act as a significant drag on the economy until it reverses. 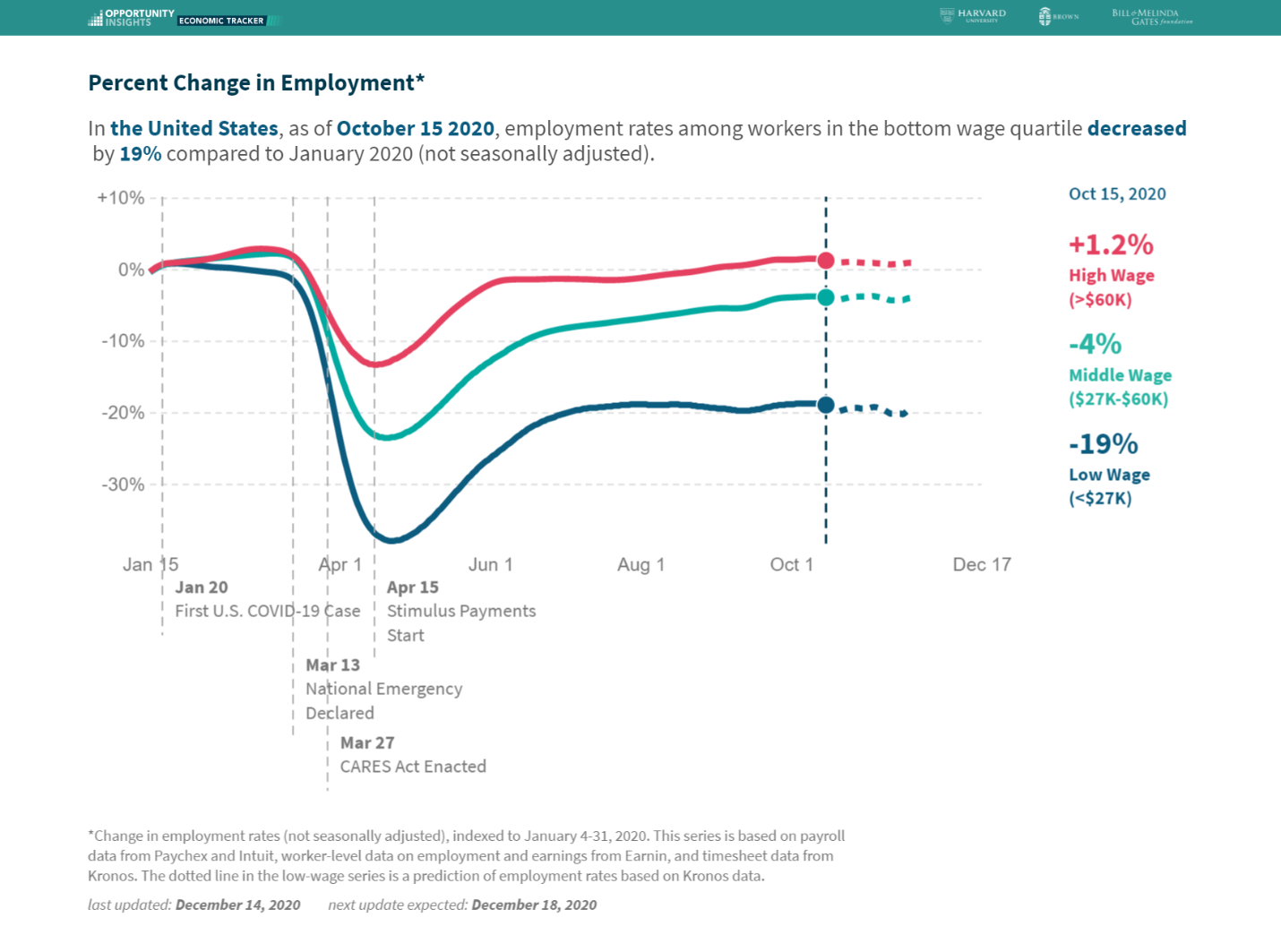 The real question, going forward, is how durable this recovery is. Much of the data has remained solid despite the ongoing third wave, suggesting substantial resilience. The question is whether the accelerating damage will reverse the economic recovery before the vaccines can be widely deployed. But the efforts by Congress to provide more fiscal stimulus should help bridge that gap. If the stimulus bill passes, it should provide the kind of boost that supported economic growth in earlier waves. This should be especially true for the low-wage populations most at risk (as demonstrated in the chart above). The government support should get us through until vaccines start to make a difference. At that point, we should start to see consumer confidence and spending bounce back, as we saw after previous waves. While the risks are real, the federal stimulus will substantially mitigate the worst of them.

Markets continued to rally and hit all-time highs again. Reasons this week are again the start of vaccinations, as well as the expectation of more Federal stimulus shortly. Both medical and economic risks now look to be close to peaking, so it is reasonable to conclude we are at the end of the beginning of the pandemic. Between the expected short-term cushion from the stimulus, and the expectation that vaccines will normalize the medical risks in 2021, markets are clearly looking for a much better 2021—and prices are responding.

The third wave of the coronavirus is still ongoing, and we can expect more case growth over the next couple of weeks. We can also see that economic damage is continuing. The good news is that vaccines are being distributed and there are signs that government policy is starting to contain the virus. So, despite the short-term damage done by holiday travel, the medical risks may be within weeks of peaking. Similarly, while the economic news continues to be worrying, the federal government’s stimulus bill should provide enough cushion for the economy to keep growing until the medical risks are better contained. The markets will likely keep bouncing around on new developments, so we can expect more volatility there in the short term.

In a couple of months, we may be approaching the end of the pandemic, which means the economy can normalize and start to grow. Despite the headlines we are seeing today, and the real risks, we can point to real progress in containing the pandemic.