This week, the big picture has been good. The trends are now positive and are likely to remain that way. The post-Christmas/New Year travel surge has faded, testing has resumed at scale, and the positive test rates have dropped back down.

Despite the positive trends, there are still two principal risks. First is that the events in Washington on January 6 could present a risk of another wave of travel-induced infections, but that risk is now aging out and is less likely by the day. Second is that a more contagious variant of the virus could accelerate infection growth, as it has in other countries. Here, again, there are no signs of it yet, but we need to be aware of it.

Offsetting those risks is the progress in vaccinations. We are now at 5 percent of the population, up from 3 percent last week. Further, the pace of vaccination is increasing, which looks to be limiting the pace of new infections. Between testing, social distancing, and vaccines, we do appear to be through the worst of it, and there is a real possibility of continued rapid improvement.

The economic news is still quite weak, but here too we saw positive signs. Job growth and consumer confidence were down last month as lockdowns widened around the country, and consumer spending took a hit. Since then, however, the federal government has passed a stimulus program, and signs of its effectiveness are starting to appear. As we saw with the last round of stimulus, this will support the economy over the next couple of months, until vaccinations start to really bring the pandemic under control.

While the current headlines continue to be bad, there are signs of improvement and reasons to believe we are close to the bottom—and may even be past it. That seems to be what markets are thinking, as a combination of decreasing medical risks and economic resiliency has kept them close to all-time highs in the past weeks. Let’s take a look at the details.

The Vaccine: Case Growth Has Peaked—Will It Last?

New cases per day. The most obvious metric for tracking the virus is daily new cases. After surges in the aftermath of the Thanksgiving and Christmas/New Year holidays, we have seen case growth drop back to levels last seen in November before the holiday surges, and the travel infections seem to be out of the system. The trend is now downward, which is good, but two principal risks remain. The first is that the events of January 6 in Washington could result in another round of infection growth, although that risk is close to timing out. Second is that a more infectious variant of the virus could push infection rates up again, as seen in other countries. While we need to keep an eye on these risks, so far at least, there are no signs that they are showing up. Absent those effects, it looks like we may be past the crest of the third wave.

Looking at the numbers, the improvement is clear. New daily infection rates were 188,520 on January 20, down from 236,631 a week earlier. The seven-day average number of new cases per day was 197,054, down from 250,092 a week ago. While case growth remains high, the good news is that the trend is now downward. If this trend holds, we are now past the peak of the third wave. 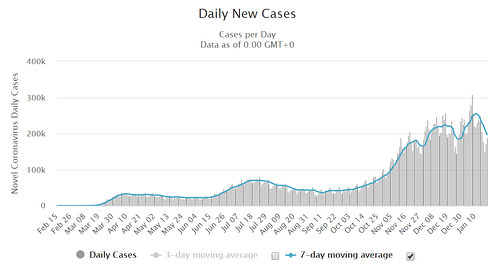 Hospitalizations. We also see the same trend with hospitalizations, which is encouraging. While case reporting has weaknesses in how the data is reported, hospitalizations are much better as a real-time indicator. Here, too, we can see a peak and slow decline. On January 20, there were 122,700 people hospitalized, down from 130,391 a week earlier. As a coincident indicator and as a better indicator of the stress on the health care system, this decline supports the idea that the trend has turned. 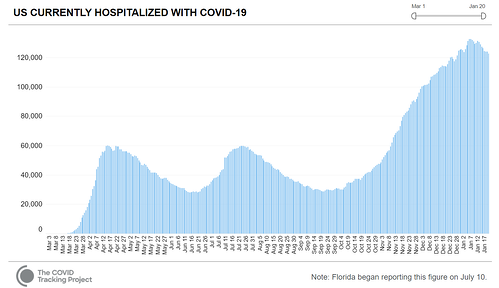 Testing news. We also see that the testing news is showing improvement. Daily testing rose again, after a pullback, and positive rates have substantially declined. This shift is more supporting evidence for the change in trend and could be a leading indicator of further improvements. 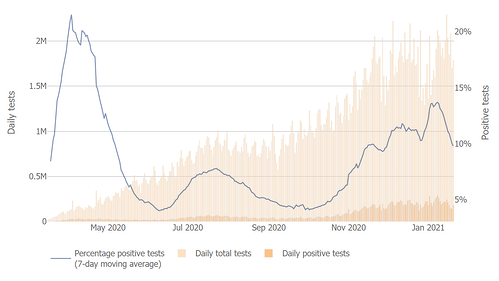 Vaccinations. Finally, we are well into the vaccination process. About 5 percent of the U.S. population has been vaccinated, starting with the most vulnerable. This improvement has very likely contributed to the positive change in trend in the other data series. Vaccinations are also likely to accelerate in the coming weeks, which should drive further improvements. 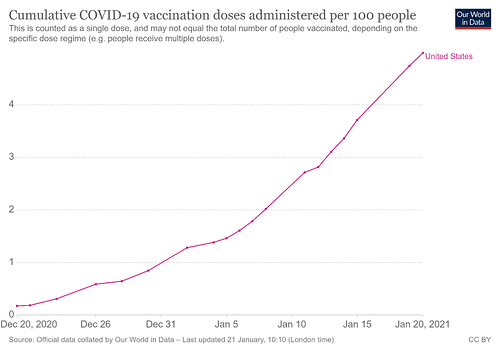 The bottom line is that while infection growth is still high and some geographic areas are still very much at risk, the data suggests that we are through the worst of it. Absent a sudden appearance of the more infectious strain of the virus, we are therefore likely to see more improvement in the next couple of weeks. As vaccine deployment accelerates, the downside risks will drop quickly. While the headlines may well continue to look worrying, the progress is very real and will continue.

Jobs and consumers. Unfortunately, despite the improvement in the medical trends, the economic data remains soft. Government-mandated shutdowns in response to the deterioration of the medical situation, along with changes in consumer behavior, have hit the economy hard in recent weeks. Job growth went negative for December, and layoffs are still very high. Most affected are workers in the leisure and hospitality industries. With the employment market down, consumer confidence has softened further, leading to a sharp drop in retail spending as reported for last month. 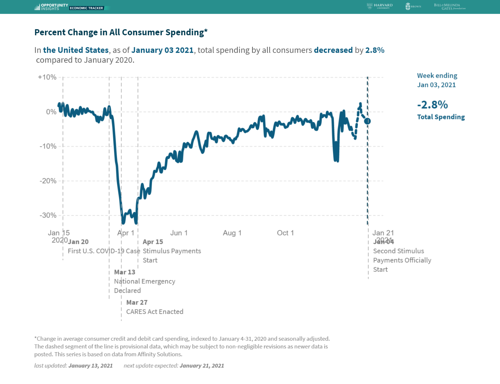 That said, we are seeing signs of improvement. The recent passage of a federal stimulus bill has helped those most at risk, and we are already seeing signs that consumer confidence and spending may improve. More stimulus is likely, which would have an even more positive effect. With all of this, we are likely through the worst of the economic impact on consumers.

Business sector. This outcome is also what the business sector is expecting. Despite the slowing in the consumer economy, business confidence and investment remain at pre-pandemic levels and have even increased a bit in December.

The real question, going forward, is how durable this recovery is. Much of the data has remained solid despite the third wave, suggesting substantial resilience even under substantial stress. As the stress lifts, with the existing and prospective fiscal stimulus package, the medical improvements, and the acceleration in vaccine deployment, the economy now looks like it will keep growing until we start to see consumer confidence and spending bounce back, as we saw after previous waves. While the risks are real, we see most of the economic risks are moving behind us as well.

Markets continued to rally and hit all-time highs again. Reasons this week are the completion of the election process (lowering political risks) and the ongoing medical improvements. Between lower political risks, the short-term cushion from the stimulus, and the expectation that vaccines will normalize the medical risks in 2021, markets are clearly looking for a much better year ahead, and prices are responding. Analysts’ earnings estimates continue to be adjusted upwards, which suggests this positive trend might continue as well.

While risks remain, the data says we are starting to move beyond the third wave of the pandemic and that medical risks are dropping. Similarly, while the economic damage continues, the federal stimulus should help mitigate the damage until the medical risks decline. The most likely case for the next couple of weeks appears to be continued improvement of the medical news and economic improvement as the stimulus package takes effect. Markets will likely keep bouncing around on new developments, so expect more volatility in the short term.

In the longer term, the good news is that as vaccines are now rolling out increasingly quickly, in a few months, we should be approaching the end of the pandemic when the economy can normalize and start to really grow again. The stimulus package should help the economy bridge the gap to that point. Despite the real risks that still remain, we are making progress—and at an accelerating rate.