There was a significant downturn in case growth late last month. Since then, however, we’ve seen an expected surge as reporting caught up after the Thanksgiving holiday. Clearly, the third wave of the pandemic hasn’t peaked.

Still, good news on the medical front continues to come from vaccines. The Federal Drug Administration is expected to approve the Pfizer vaccine, which has already been approved in the United Kingdom. The Moderna vaccine is expected to get a vote next week. Actual vaccinations could start as early as next week, and recent projections of vaccine availability suggest we could approach herd immunity in the U.S. as soon as June. While the risks continue to rise in the short term, the likely vaccine deployment means medium and longer terms now look much better.

The pandemic effects continued to show in the economic news. Job growth dropped significantly in November, down to 245,000 new jobs, and layoffs were up sharply in the past week. Much of this is due to widening shutdowns in multiple states, in response to the pandemic. Despite the slowdown, growth continues, albeit at a slower pace. This is what financial markets are seeing—continued growth along with vaccines and the prospect of herd immunity—and that has kept them close to all-time highs in the past week. Let’s take a look at the details.

New cases per day. The most obvious metric for tracking the virus is daily new cases. We are now starting to move past the distortion in the data caused by the Thanksgiving holiday. Signs are that the pre-holiday slowdown has reversed, with holiday travel generating a new surge in cases.

New daily infection rates were 226,953 on December 9, up from almost 206,758 a week earlier. The seven-day average number of new cases per day rose to 213,397 per day, up from 168,423 a week ago. Both increases happened after a sharp holiday-related pullback, but the underlying growth trend has since become clear again. 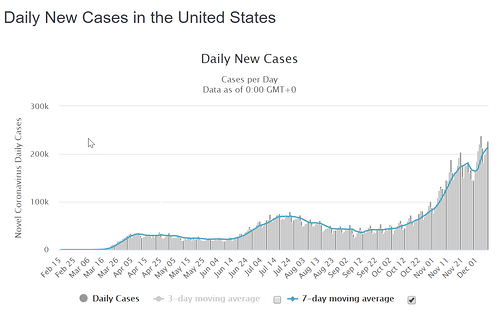 Death rate. The death rate reporting was also affected by the holiday, with a short-term decline and then a sharp bounce. This is a lagging indicator and runs from 6–8 weeks behind case growth. As such, recent increases in the death rate reflect faster infection growth in late October. On a seven-day moving average basis, daily deaths were at 2,401 as of December 9, up from 1,665 in the prior week. As the number of new cases has spiked since early October, we can reasonably expect death rates to increase substantially over the coming weeks. 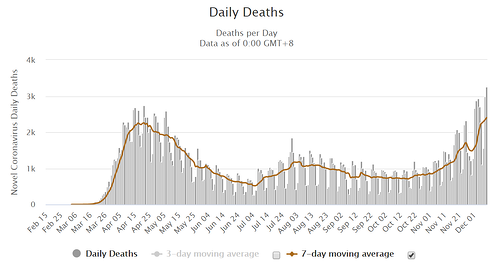 Testing. Finally, we see some tentative signs of improvement in the testing news, as positive rates may have peaked even as the number of tests is down from peak levels. This could be a leading indicator of improvements. In any case, it suggests future case growth may moderate. 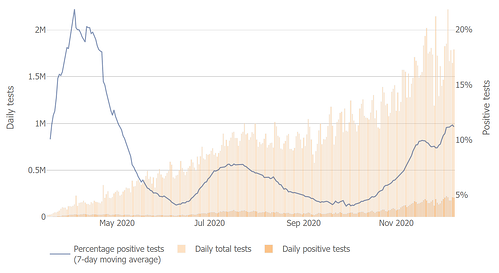 The bottom line is that on the medical front, despite earlier signs of improvement, the effects of Thanksgiving travel appear to have extended the third wave of the pandemic. As such, the risks are still substantial. That said, given the wider imposition of shutdowns and restrictive policy action, further improvement is likely after the effects of travel fade, which should be in the next couple of weeks. We are also getting closer to the point of actual vaccine deployment, which should start to bring the pandemic under control as well. While risks will keep going up in the short term, the medium- and longer-term pictures look brighter.

Jobs and consumers. Government-mandated shutdowns in response to the deterioration of the medical situation, along with changes in consumer behavior, have hit the economy hard in recent weeks. Job growth dropped from 638,000 in October to 245,000 in November, and layoffs rose sharply last week from 712,000 to 853,000. With the employment market down, consumer confidence has softened further, leading to a sharp drop in retail spending (as shown in the chart below). With the sharp deterioration in the higher-frequency data, it is likely that the monthly numbers will soften considerably as well. Overall, the data suggests that the third wave has now hit a point where it will act as a significant drag on the economy until it reverses. 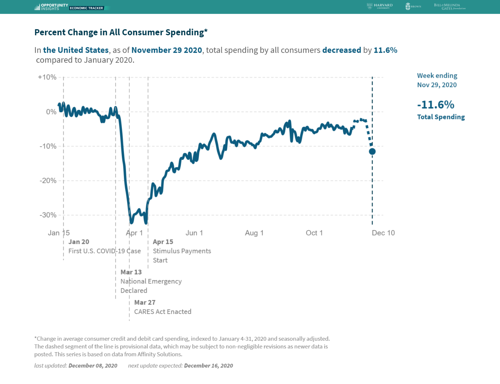 The real question, going forward, is how durable this recovery is. Much of the data has remained solid despite the ongoing third wave, suggesting substantial resilience. The question is whether the accelerating damage will reverse the economic recovery before the vaccines can be widely deployed. So far, given the resilience of the economy and the fact that it is still growing, it is still likely the recovery will stay alive until the cavalry arrives, in the form of either the third wave moderating or vaccines becoming widely available. At that point, we should start to see consumer confidence and spending bounce back, as we saw after previous waves. Another potential savior is another federal income support program, which is looking likely and would help the economy ride out any weakness.

Markets continued to rally and hit all-time highs again. Reasons this week are again the good news on the vaccine front. The chances of vaccinations starting in the next week or so, with widespread availability in the next couple of months, now look very real. With the potential for widespread access to multiple vaccines in the near- to medium-term future, markets are largely ignoring the shorter-term risks, both medical and economic.

Given everything that is going on, that seems a reasonable reaction, but one that also leaves open the possibility of more volatility ahead if medical risks move back to the headlines or if the economic damage continues to mount. We can reasonably expect the current positive trends to have some durability over the next couple of weeks, but any setbacks could easily lead to more volatility during that time.

The risks will continue to rise in the short term, as the third wave continues to get worse and with the economic damage mounting. That said, growth has continued and has been much more resilient than expected.

Given all of this, over the next couple of weeks, we will see substantial uncertainty in both the medical and economic news. The most likely case appears to be slow improvement of the medical news, as case growth starts to slow again, and slowing but continued deterioration on the economic front. Markets will likely keep bouncing around on new developments, so expect more volatility. The good news is that we may well be approaching the beginning of the end of the pandemic if vaccines roll out as expected. We will get the pandemic under control again—but it will just take a bit longer.